New build after 8 years away 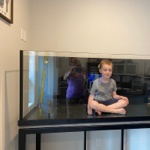