Anyone have Green tree pythons? 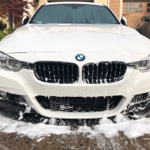